Welcome to the wonderful world of geomorphology

Geomorphologists often use the term 'palimpsest' to describe the landscape or terrain we see around us.  What they mean by this is that the landscape has been shaped by many periods of geomorphic change, each change acting upon a surface that has been already altered by previous processes.  In many cases, evidence of the former processes can be seen partially hidden by the most recently produced landforms.  For example, Quaternary glaciations deposited till and other material over much of the lowlands of Britain - which partially obscured landforms produced in the Tertiary period.  In some cases pre-existing topography such as folded landscapes produced by tectonics influences the location of later erosion and sedimentation. 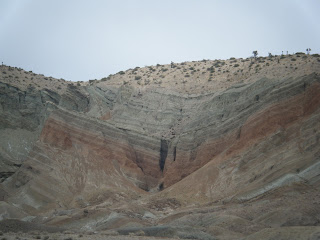 An example of folding of Miocene sediments, producing a syncline over which later Quaternary sediments have been deposited.  From the Mojave Desert, California.

But where does this term 'palimpsest' come from and what does it mean?  A palimpsest comes for the Greek for 'scraped again' and is used by historians to refer to manuscripts (often written on parchment or vellum) which have been rubbed out and new texts written over the top.  Often this process has been repeated many times.  A good example, which forms the basis of an exhibition at the Walters Art Museum can be found described and illustrated at:

Posted by Heather Viles at 7:58 PM

Email ThisBlogThis!Share to TwitterShare to FacebookShare to Pinterest
Labels: Introduction

Geomorphology Image of the Week

Geomorphology Image of the Week

The Holbeck Hall rotational landslide occurred in June 1993 south of Scarborough in North Yorkshire. The image shows the classic morphology of such a feature. The British Geological Survey provide a good image gallery - click on the image above to find out more... A good introduction (but then I would say that wouldn't I?!)